Lloyd Scates originally founded the company as San Diego Services, which started its operations on January 01, 1999. Due to its growth and expansion to other markets outside of San Diego County it eventually became Paragon Services Engineering. He played a vital role in its expansion process throughout its operational markets of today in Arizona, Northern California, Orange and Los Angeles counties, in addition to San Diego.

Lloyd possesses extensive background and experience in large, heavy tonnage, mechanical systems in high-rise buildings for which, even today, he is called upon to provide consulting services. He’s been known to be called upon by the U.S. Navy’s Pacific Fleet Command to resolve issues on their submarine vessels.

Prior to founding Paragon Services Engineering, Lloyd has held several high profile positions within the commercial real estate industry. Those included construction project management, during which he assisted in the construction of a 400,000 square foot commercial multi-use project in San Diego’s Mission Valley. Afterwards he went on to become Facilities Manager for several of San Diego’s downtown high-rise buildings. During his tenure, he spearheaded the initial acquisition, and development of the Children’s Hospital downtown ice skating rink venue and its construction for the benefit of Children’s Hospital charities. To this day, it is still supported by Paragon Services Engineering.

Presently, he is the Managing Partner for Paragon Services Engineering, in all of its operating markets.

He is an active member of Building Owners and Managers Association (BOMA) of San Diego and San Diego Building Engineers Association (SDBEA). He holds the BOMA’s prestigious RPA accreditation and continues to contribute his time to the educational programs of BOMA by teaching its aspiring RPA Candida.

Connect with Lloyd on LinkedIn.

After being Honorably discharged from the US Army as a Combat Engineer in 2004, Ryan returned to San Diego to begin his career in the trades. Working as an electrician while enrolled in the IBEW electrical apprenticeship program Ryan began building his base of knowledge that would ultimately lead him into commercial real estate operations.

In 2009, Ryan began working with Paragon Services in San Diego, CA as a Building Engineer. Within this capacity, Ryan used the knowledge gained in previous experiences to learn and advance. Paragon Services had portfolios in Phoenix, Arizona where Ryan took the opportunity to move locations and seek further technical training, this time in the HVAC/R field. In 2011, he took a position with 4 Class A Commercial Properties where he was responsible for all daily operations along with project oversight of several Tenant Improvement and Capital projects.

While in Phoenix, Ryan worked his way up through many of Arizona’s most recognized properties including serving as the Chief Engineer of a downtown highrise. After many years of seeking greater challenges and further education, Mr. Scates was brought on as the Operations Manager for Paragon Services, overseeing all operations in Arizona and Nevada where he continued to develop as a Leader and Operator.

In his current role as President of Paragon Services, Ryan aims to lead the company into the future utilizing the proven methods Paragon has developed throughout the decades while ensuring we stay ahead of the ever-changing commercial real estate landscape.

Connect with Ryan on LinkedIn. 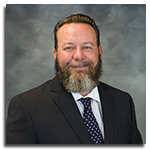 Daniel has been with Paragon since 2009. Daniel started with our company as a building engineer and was promoted to Lead Engineer very shortly after coming onboard. He was then promoted to Chief Engineer where he was responsible for a 2.5M square foot portfolio.

Daniel’s priority is to ensure quality compliance, which is one of Paragon Service’s highest commitments to our customers. He is responsible for professional, managerial, technical, and administrative functions of the engineering division of Arizona. Additional, Daniel is responsible for staffing and maintaining a diverse group of innovative and talented professionals who provide high quality building systems operational support and maintenance, in support of tenant comfort and facilities operating costs. Daniel will be committed to being fully responsive to the needs of building ownership and management team who are its customers.

Prior to starting with Paragon Services, Daniel was owner/operator of a general services and remodeling company servicing commercial and residential clients in the Phoenix metropolitan area. Specializing in restrictive deadline (quick turnaround) value-add projects in multiple trade disciplines for a wide variety of clientele. He also was the owner/operator of industrial coatings and decorative finishes company servicing commercial and residential clientele.

Daniel brings a great amount of knowledge not only in building operations but project management coupled with years of commercial construction experience.

Connect with Daniel on LinkedIn.